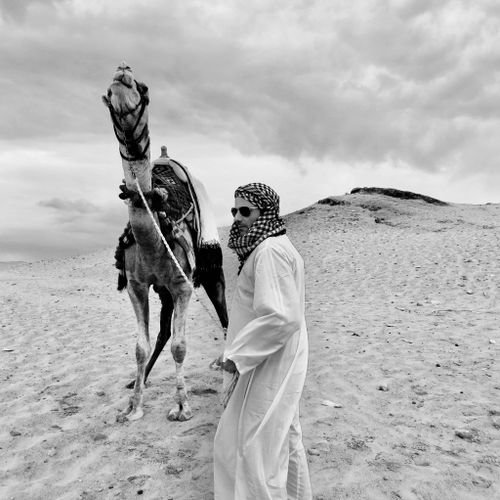 Eric was classically trained on the piano from the age of 6, with his appetite taking a more modern focus when he discovered the melodic pop of the second British Invasion in the 1980s by bands such as Duran Duran, Depeche Mode and The Cure. In 1997 he released his debut album, 9 Demos on a 4 Track, which was a home recording done between August and December of that year. With this release he caught the attention of John Taylor, who approached Eric with the opportunity to sell his album on Taylor's own Trust The Process website. Eric double majored at the University of Miami in Public Relations and English, and he also received a masters degree in Music Business. While at the University, Alexandrakis produced the first CD album to contain digital watermarks (for U.M.'s student run record label). The technology created by Bluespike.com was the first of its kind, and to date is being used by most major record labels and film production companies, paving the way for modern digital protection. His 1999 release, IV Catatonia, was a twenty-two-track collection of eclectic songs and sounds, which was also done from his home four-track studio. Eric is also a photographer, with his work included with John Taylor's Japan Album. Two years later the independent label Serious Vanity released his cover version of Arcadia's "Election Day" on their Bangs...Sounds of the ‘80s album. Another compilation called Music To Kill For features Erics' Stalking Fever (No Sleeping In The Dark)" (edit). Eric currently does production work in Miami (USA) including recordings and mixes for local bands, commercials, promotional films, as well as photography for web pages and local releases. He mainly works with his music production & publishing company Minoan Music both as a solo composer and with his new scoring collective called Electrons, which includes working with producer Anthony J. Resta, guitarist Warren Cuccurullo, and drummer Steve Ferrone. Eric has also made appearances in television commercials benefiting cancer research, and has had small roles in films such as Miami Vice and Dexter. Eric recently produced K-Syrans single entitled - Dizzy